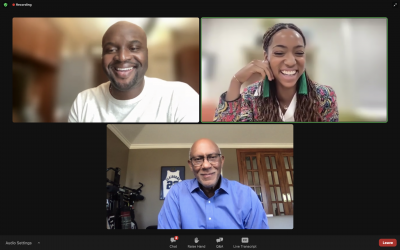 Fifty years separate the days when Claudius “C.B.” Claiborne and Michelle Staggers completed their undergraduate degrees at Duke. But a conversation held February 28 made clear that the former student-athletes had plenty of shared experiences, along with a few key differences.

Now a professor of business and marketing in the Jesse H. Jones School of Business at Texas Southern University, Claiborne was the first African American basketball player at Duke and earned a B.S. in Mechanical Engineering.

Staggers was a member of the varsity women’s lacrosse team who graduated in 2019 with a degree in Cultural Anthropology. Her senior thesis project examined the history of Black male athletes at Duke.

The two were brought together for “The History of Black Student-Athletes and Activism at Duke,” hosted by Black in Blue: The Duke Sports & Race Project. The faculty-led initiative aims to critically study race and sports at Duke and beyond through courses, public events and workshops with student-athletes past and present.

During the discussion, which was moderated by Duke postdoctoral associate Javier Wallace, Claiborne and Staggers touched on the academic, the athletic and the activist components of their respective Duke experiences. Claiborne participated in the 1969 Allen Building sit-in during his senior year, and Staggers co-founded Duke United Black Athletes in 2018.

The journey to Duke

Both natives of Virginia, Claiborne grew up in segregated schools but was always encouraged to pursue higher education by his family and coaches.

“I knew I was going to go to college — that was something that was really valued by my family,” Claiborne recalled. “Not once did they ask me, ‘How is basketball going?’

“I chose Duke — like so many people — primarily (for) education. It was about the education first and, ‘oh yeah, they have a really good basketball team.’”

He described meeting his Duke roommate for the first time — a fleeting interaction because the young man and his father were rushing off to get the latest edition of a calculus book. “Those were the kinds of guys I lived with,” Claiborne said, laughing.

Staggers’ journey was different. The discussions about her collegiate destination centered on opportunities within her sport, she said. “All I wanted to do was play on the best lacrosse team possible, and out of the offers I had, one of those was Duke.”

But a broader shift had occurred in the student-athlete experience since Claiborne’s time. Staggers’ arrival at Duke came with a binder of expectations about how student-athletes should conduct themselves on the field and off.

“The NCAA has become more commercialized over the decades…we know now that it looks more like professional sports,” Staggers said.

“I didn’t see myself as a scholar nor was I encouraged to…the reality is that those two words (student-athlete) should be flipped. I was just grateful and humbled that I was also with people who valued academics.”

Her time at Duke could be lonely, Staggers said, despite her previous experience navigating a predominately white high school. Fortunately, other Black women who were student-athletes became “friends and even sisters, because that bond was unbreakable.”

Neither of these alumni set out to become activists, they said. But when students in the Afro-American Society staged a takeover of the Allen Building in 1969, Claiborne’s reaction was “of course I was going to be a part of that.” His role as an athlete didn’t have anything to do with it.

"We were becoming more culturally aware — it was the time of Black identity,” Claiborne continued. “We came to this campus and you look around, and there are seven of us. Why aren’t there Black faculty? Why can’t we get a haircut in the barbershop on campus? We started asking these questions…and making some demands.

“It’s not that we wanted to burn down the university or do anything radical, we just wanted our environment to become more proactively inclusive.”

Meanwhile, Staggers found she had more time to reflect on her place at Duke and in the world when a concussion — the first of several — sidelined her during the fall of her sophomore year. Her African & African American Studies courses, learning more about history and identity, the election of Donald Trump, and the rise of Black Lives Matter were all part of her college experience — and that of her peers.

“Our eyes started opening that we’re very much within a system and trying to understand our personal experiences but also things that were more systemic related to our identities, our cultural histories and how that played out in relation to the sports arena,” Staggers said.

“I still struggle with identifying as an activist, because looking back at my experience and the creation of the group called United Black Athletes…we just needed a space. I don’t know that we were thinking of big-scale activism. But it was more like ‘Black athletes need to meet each other, how can we make that happen?’”

Claiborne said activism is often about fighting for something that you know should be yours, though it isn’t widely acknowledged.

“When I talk about inclusivity, it’s not let me in the door,” he said. “I’m already here. I belong here. If we’re putting in the same effort, we’re making the same contribution, we should get the same rewards as everybody else.”

It was clear throughout the conversation that despite challenges, both alumni take pride in having attended Duke — and in what they believe the institution could become.

“When I go to Duke now, it looks like the United Nations,” Claiborne said, adding that the university “has taken steps toward becoming proactively inclusive.”

He reflected on the presence of Duke President Vincent Price at the 50th anniversary commemoration of the Allen Building takeover and how that event is now regarded as an important step that changed the direction of the university.

“That’s not over now,” he said. “(Duke) can be a model in the world for what a university is and what it should be.”

“What other university is willing to confront their racial sports past?” Staggers asked. “That is something that is really exciting.”

“I have to be an optimist, looking into the future and knowing that change is possible,” she continued. “Black athletes at Duke should know they have the support and mechanisms at this institution to really do some amazing work. It could be a pivotal moment for the university, and that makes me joyful.”